The energy system by 2050 can be completely transformed from where it is today, but we will need to really pick up the pace. We need to go from adding 20 or so gigawatts (GW) of wind and solar a year to around 130 GW a year for the next 30 years. This article goes through the numbers.

There are a number of paths to get us to a 100% carbon free energy system by 2050, but they will all be some combination of 5 main ingredients:

As mentioned in my earlier articles, I prefer an economy-wide price on fossil fuels similar to that developed in the Energy Innovation and Carbon Dividends Act (EICDA), a bill in the US House of Representatives. The EICDA calls for a carbon fee starting at $15 a ton and rising at a rate of either $10 or $15 a year, the rate of increase depending on whether certain targets are met. All proceeds are placed in a fund separate from the US Treasury and are promptly distributed to US households as a dividend. Exports and imports are subject to a border carbon adjustment to protect US industry and to encourage trading partners to adopt a similar fee on carbon.

I’ve concluded that this carbon fee plus strategic investments in research and in removing barriers will lead to increasing energy efficiency, greening the grid, and ending direct fossil fuel use. The economic incentives will be massive, the hand of government will help in a “surgical” way to ease the way, and the technological trends are already in place to make this whole enterprise come together toward a complete energy system transformation. The transformation is likely to happen even without the fee and the public investment, but the transformation will be too slow and would likely happen so much later in this century that our fight against climate change would be severely hampered.

This is now my 6th article in CleanTechnica on this general subject, and my third in a series illustrating how the energy system might evolve. I continue to refer to far more sophisticated academic studies, which I will reference as the 2035 Report and Jacobson below, by developing my own spreadsheets and reasonable assumptions as sort of a “thought experiment” to provide a “reasonableness test” on the more sophisticated studies.

The 2035 Report discusses how a 90% green grid might make more sense than a 100% green grid in an interim year like 2035. Jacobson shows that a massive uptick in wind and solar investments will be needed to have a 100% green grid by 2050 and to electrify 100% of non-electric energy uses by that time. Despite the massive investments needed, the resulting electric system would have slightly lower electric rates going forward than the system that we have today, with far fewer social costs for pollution-related health problems and overall climate impacts.

The biggest challenges are:

Building on the energy demands I postulated for 2035 in my last article, we can extend the analysis to show what the total energy demand would in 2050. The assumptions: 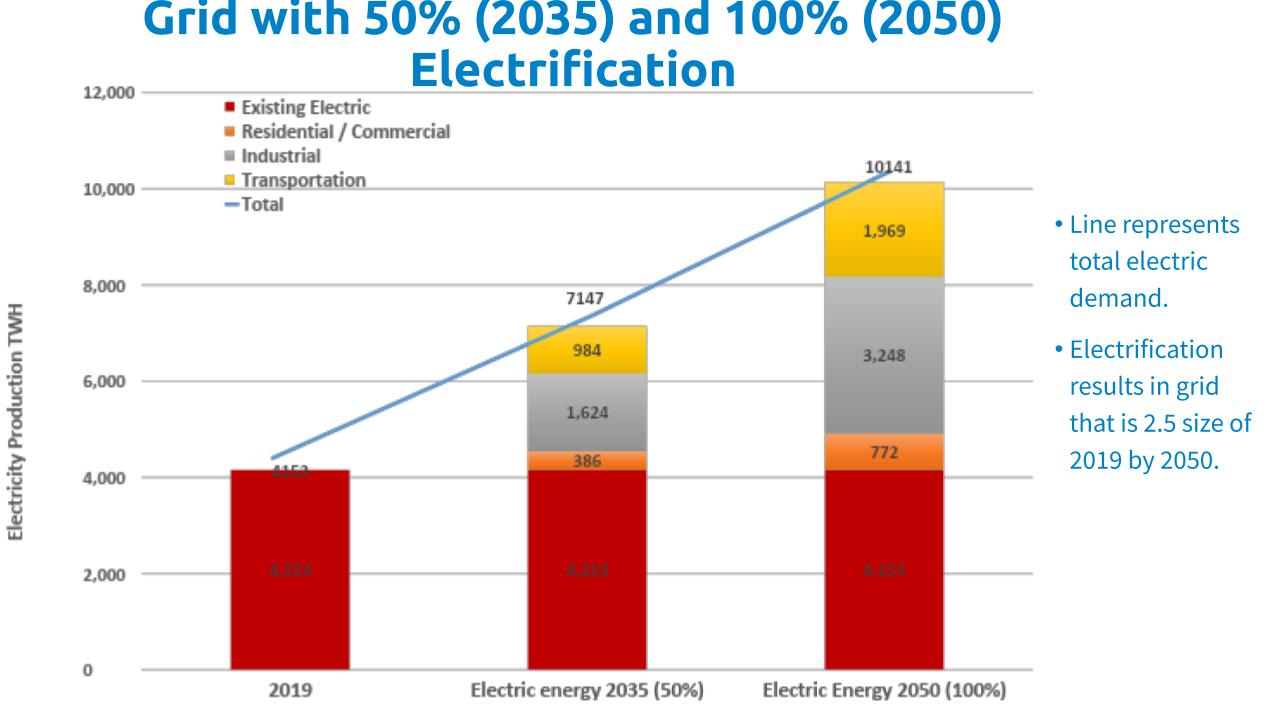 I explored some case examples of reduction in primary energy use in another earlier article. These assumptions are informed by similar ones made by Jacobson, et al. Although, Jacobson assumes even greater efficiency gains. Another good resource for those interested in a deeper dive can be found in NREL’s “Electrification Future’s Study.”

Under these assumptions, here is what the electric system demand would be in 2035 and 2050.

The 2050 fully electric energy demand of 10,141 TWh is comparable to Jacobson’s final estimate of 8,230 TWh. The difference between this assessment and Jacobson’s is mostly due to assumptions of greater efficiency gains and greater reduction in final demand due to eliminating the energy use of the fossil fuel industry.

Unlike the 90% clean 2035 grid we explored in the last article, the 100% clean 2050 grid must deal with the vexing issue of seasonal imbalance. By way of building to our final result for this thought experiment, let’s first consider what the 2050 system would be like with 10% fossil still on the grid. Most of the time renewable resources (wind and solar) power the grid leaving the remaining fossil fuel fleet to pick up energy demand for months where wind and solar fall short. Here is what monthly energy demands and production look like: Monthly energy has now shifted and what was a summer peak in 2019 is instead a pronounced winter peak by 2050. Compare January, April, and July. In January, solar and wind are near their annual low point (546 TWh), whereas electrified energy demand is at its annual high, due to the heavy heating use of residential and commercial sectors. Fossil fuel use (at 271 TWh) is highest in January, so that is where electricity from seasonal storage would need to go. In April, solar and wind reach their highest surplus over annual demand, so that is when curtailments (112 TWh) are highest. In July, solar and wind reach their high (735 TWh), but fossil fuels are still needed.

If we didn’t have to worry about seasonal storage, it would be easy to get to 100% — just use energy in surplus months like April to supply energy in months like January when demand is high and wind and solar are low. The numbers for this option (if it were at all realistic) suggest the need to store around 550 TWh of electricity from April through October to generate power from November through March.

Unfortunately, the seasonal problem is qualitatively different from the daily or weekly problem. Seasonal imbalances do not lend themselves to a “store energy from solar during the day to meet energy demands at night” kind of solution, which will be solvable through cheap batteries. This seasonal problem demands more of your “cut firewood all summer to have enough for winter” solution.

How do we deal with this likely seasonal storage need? What are our options?

It’s Not Going to Be Batteries

Adding enough batteries to solve seasonal storage at scale is just not going to be economical. Assume the battery is used for 50 years and you can get it below Musk’s recent projection on Tesla Battery Day for a 56% reduction in battery cost. Assume we are even more successful and it only costs $50 per kWh. And assume such a battery has no degradation in output over time. (Batteries today lose power when they sit unused for periods of time, as does hydro storage through evaporation.) But even if you could get a battery with no degradation, the cost for one cycle a year is $1.00 per kWh ($50 per kWh amortized over 50 years).

There are going to be much cheaper alternatives than a battery that costs $1 per kWh per use. Think of it this way: the economic case for batteries comes from allowing it to store electricity when it is cheap so the battery is available to use when energy is expensive (or when renewable energy isn’t available). Natural gas generating costs today are in the range of $.028 per kWh — so even if the electricity I use is free, the battery cost is 40 times the cost of what I am replacing. It would take an exceedingly high carbon fee on gas to make that economical, and surely other options will be less costly.

One solution is to build more renewables than we need. Zach Shahan wrote about this solution in a recent article, and this option is relied on to a great extent by Jacobson.  Continuing our thought experiment, consider a version of the 2050 system that relies only on overbuilding renewables to solve the seasonal storage issue. Voila! There is no longer any month that requires fossil fuels! In every month, energy production exceeds demand except for January, which before had the greatest fossil fuel use.

How does this scenario compare to a storage solution with an annual cost of $1 per kWh? In the scenario where we met the demand through storage alone, we would need to have 550 TWh of storage available, and at $1 per kWh, that would cost $550 billion per year. And that low of a cost is only possible with very beneficial battery cost and performance characteristics.

And there’s more. The US gets something for that extra wind energy — a resource that is available for extremely cheap energy during most of the year that could be used for some other beneficial activity.

These summary numbers compare quite well to Jacobson. The energy system I’ve modeled here, with seasonal storage handled through overbuilding, results in a system that requires over 11,000 TWh of wind and solar, broken down as about 2/3 wind and 1/3 solar in terms of production. In terms of capacity, that amounts to approximately 2.2 TW of solar and 2.1 TW of wind (derived by assuming a capacity factors of 20% for solar and 40% for wind). Jacobson’s far more sophisticated analysis yielded a 2050 system with 2.1 TW of solar and 2.3 TW of wind. My final spreadsheet analysis was quite close.

Part 1 of this article shows a 2050 generating system that can meet all energy needs of the US through clean energy and solve the seasonal intermittency problems through overbuilding wind energy. Overbuilding alone may not be the best option, but it is clearly superior to building energy storage for the sole purpose of solving seasonal intermittency.

I’ve also estimated how much total energy and capacity would be needed for both wind and solar. The approximately 4 TW total renewable capacity ties in closely with Jacobson’s more comprehensive and sophisticated study.

The 4 TW we need to build is an order of magnitude increase in the total installed capacity over the next 30 years. This is about 130 GW of new capacity needed each year, or about 6 times what we installed in wind and solar capacity in 2019. We’ve got our work cut out for us. The US will need to invest on the order of $150 billion per year for the solar and wind capacity needed to get there.

I’m now working on Part 2 of my assessment of the 2050 system. In it, I plan to dig deeper into solving the seasonal intermittency issue and discuss the magnitude of the energy transition in more detail.

Brad Rouse lives in Asheville, NC and is deeply involved in local efforts around the energy transition. He lobbies Congress for carbon fee and dividend as a volunteer for Citizens Climate Lobby. In 2016 Brad started a non-profit – Energy Savers Network – that mobilizes volunteers to help low income people save energy. He has a rooftop solar installation and his family cars are a Tesla Model 3 and a Prius Plug-in hybrid with 150,000 miles and still about 9 miles of EV only range.  He has been studying energy economics for over forty years and holds a BA in economics from Yale University, where he learned about pricing pollution through a fee in freshman economics class. He also holds an MBA from the University of North Carolina at Chapel Hill.